Virtual Debate: “This House Believes that the Received Wisdom that Litigation Practice Is the Best Foundation for a Successful Career in Arbitration Should No Longer Be So Readily Received” (9 December 2021)

Users opt for arbitration to stay out of court. Yet, within legal circles, the traditional wisdom (and oft-repeated advice to new and younger entrants) has been that one must first develop strong foundations in litigation practice in order to flourish in arbitration practice. With the increasing diversity and complexity of contemporary arbitrations – including its cross-border dimensions and interface with laws, courts and arbitrators from different legal traditions, desire for deep subject-matter expertise and intersection with other modes of dispute settlement – SIArb put this notion under the spotlight during its Annual Debate 2021. Does this hitherto received wisdom still hold, or are there (or should there be) more varied routes to building a successful career in arbitration (be it as counsel or arbitrator)?

Held on 9 December 2021, this was fourth edition of this popular and well-received format event and the second year that it was held full virtually. Chaired by Divyesh Menon (Mayer Brown), the event featured a diverse panel of debaters and judges – each of whom have trekked their own unique arbitration journeys.

Proposing the motion “This House Believes that the Received Wisdom that Litigation Practice Is the Best Foundation for a Successful Career in Arbitration Should No Longer Be So Readily Received” were Anthony Cheah Nicholls (Forte Law) and Arvindran Manoosegaran (Omni Bridgeway). The proposition team began by setting their parameters; positing that as long as they established that litigation is not the “best” foundation for arbitration, the motion must be carried. They then embarked on identifying particular features of a litigation practice that distinguish it from arbitration – ultimately leading to the submission that there was nothing intrinsically unique or special about a litigation practice that could not be developed elsewhere. Speaking against the motion were Meryl Koh (Drew & Napier) and Christopher Bloch (Squire Patton Boggs), who emphasised the hallmarks of court craft that are also the cornerstone of arbitration, key transferable skills from a litigation practice and concluded that there was no clear need or basis to depart from the traditional formula.

Following the main speeches, it was over to the audience and judges, Sapna Jhangiani QC (Attorney General’s Chambers) and Cameron Ford (Squire Patton Boggs) to put the debaters and their arguments to the test. The Q&A segment was one of the liveliest and most engaging in this series. Issues discussed included whether litigation or arbitration provides better opportunities for new practitioners to cut their teeth in advocacy and whether arbitration is now the test bed for best practices in adversarial dispute resolution procedure and will increasingly set standards for courts.

The debate started with 60% of our audience in support of the motion, and 40% against. By the end of the debate, Team Opposition had swayed at least 8% of the audience towards them, but Team Proposition managed to defend their early advantage – the final audience poll showed 52% for the motion and 48% against, while the Judges were evenly split. The debate concluded with consensus that, in the era of cross-border dispute resolution, both litigation and arbitration were each indispensable building blocks that younger and new entrants had to gain solid experience in. Sapna wrapped up the session with a rousing call to senior members of the community to invest in ensuring that junior members were given real opportunities and pathways to develop themselves, particularly in advocacy. 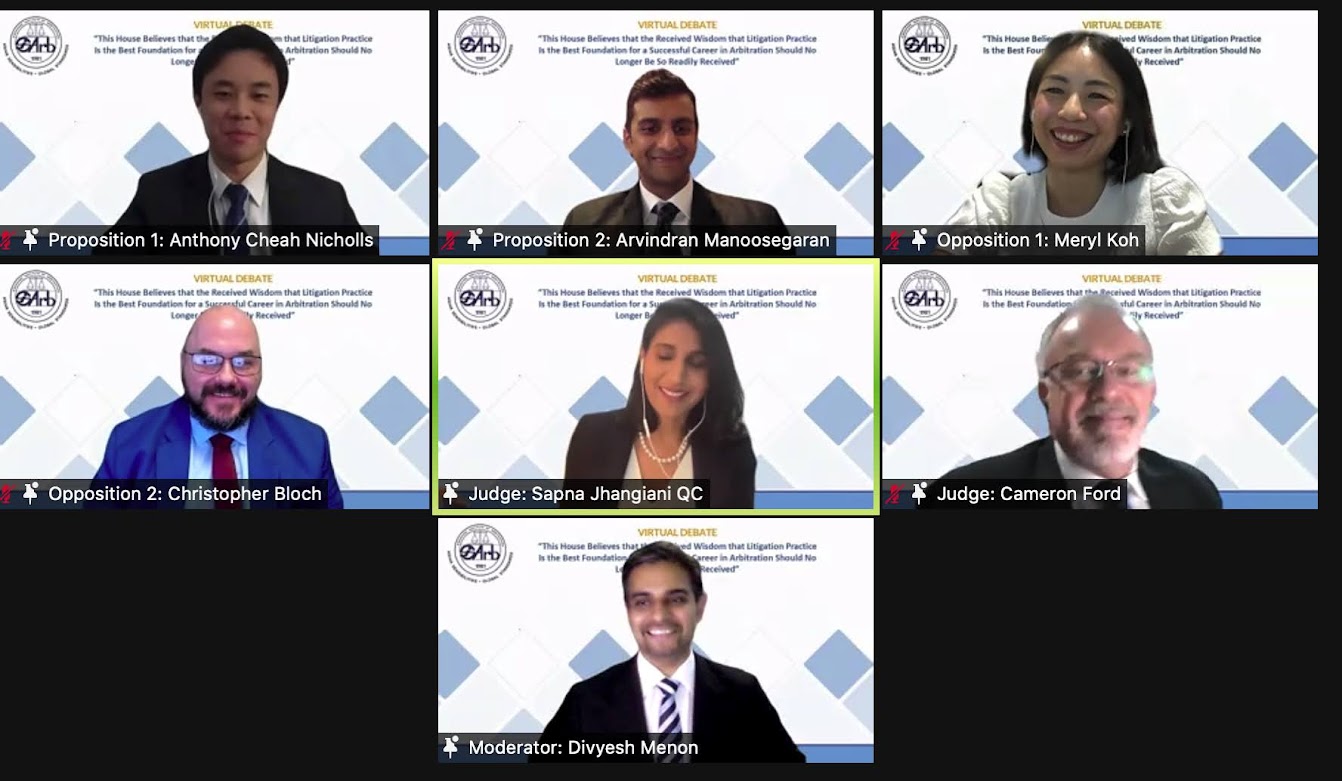 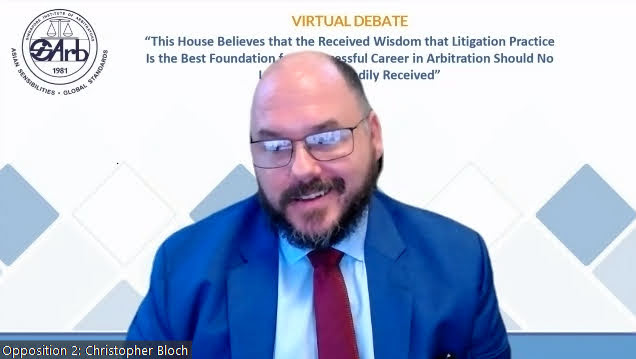 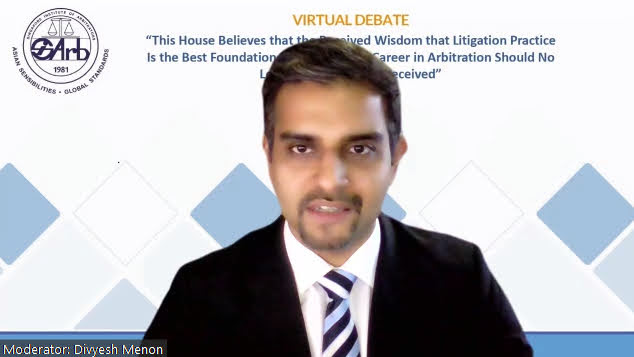 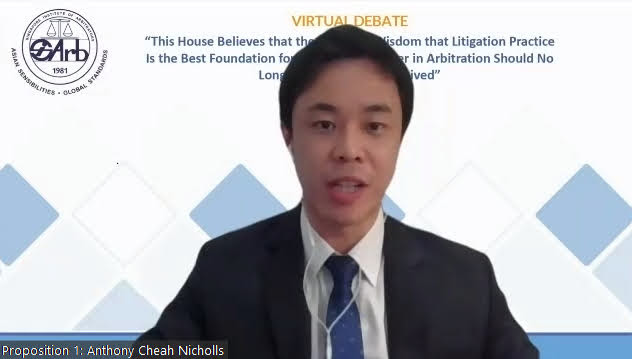 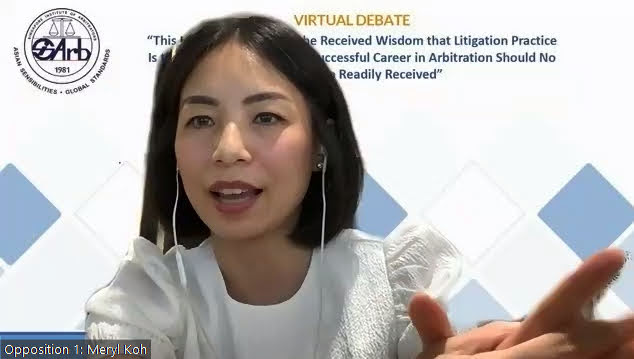 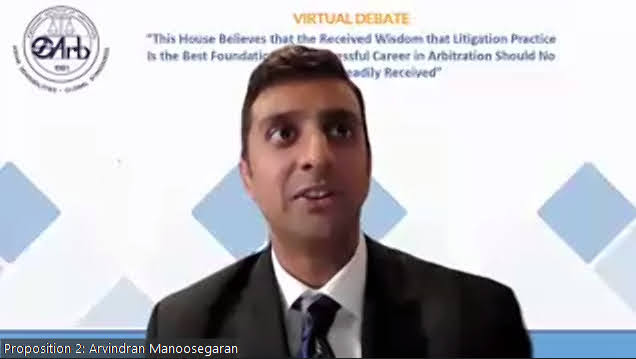 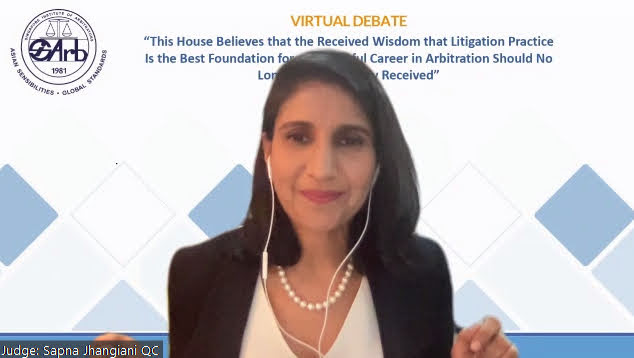