SIArb’s webinar on the turmoil in the global gas markets, being the first of a two-part series focusing on the energy disputes, took place on 21 June 2022.

We had the pleasure of having an esteemed quartet involved as panellists for this webinar, with two economists and two senior legal practitioners, respectively Dr. Boaz Moselle and Luis Agosti (both from Compass Lexecon), and Dr. Johannes Willheim (of Jones Day) and Nick Lingard (of Freshfields, Bruckhaus Deringer), each of whom has had considerable experience in recent years being involved in gas price reviews and disputes in this arena. SIArb’s Honorary Treasurer, Ms Tan Weiyi, moderated the discussions.

Due to the nature of the subject matter and wide-ranging expertise of the panellists, we were able to adopt a slightly unique and nuanced mode of delivery with the webinar essentially being split into three distinct parts (Overview, Gas Price Reviews and Infrastructure) with panellists taking the attendees through short presentations in each part, which were then followed by a moderated discussion. This way the panellists were able to maximise the allocated time with broader issues covered in their slides and to then delve deeper during the moderated discussions.

Participants were treated to a breadth of information as Dr. Moselle kicked off the webinar with an overview of the current state of the gas market and pricing.

Luis Agosti then followed to lead off the second part by giving an economist's perspective on gas price reviews, and the legal experts, Johannes and Nick followed up by sharing their broad experience in the EU and Asian markets respectively.

For the third and final part on Infrastructure, the legal experts took centre stage touching on the dispute resolution aspects and potential dispute avoidance mechanisms to mitigate risks.

Broadly, some of the major touchpoints covered during the webinar were the effect of the war in Ukraine, fundamentals in ascertaining the viability of an energy source (i.e. whether it is affordable, secure, and clean), the impact of long term LNG supply contracts, the inclusion of price review clauses and the indexation mechanisms therein, as well as the effect of the governing law of such contracts, being predominantly New York and English law. 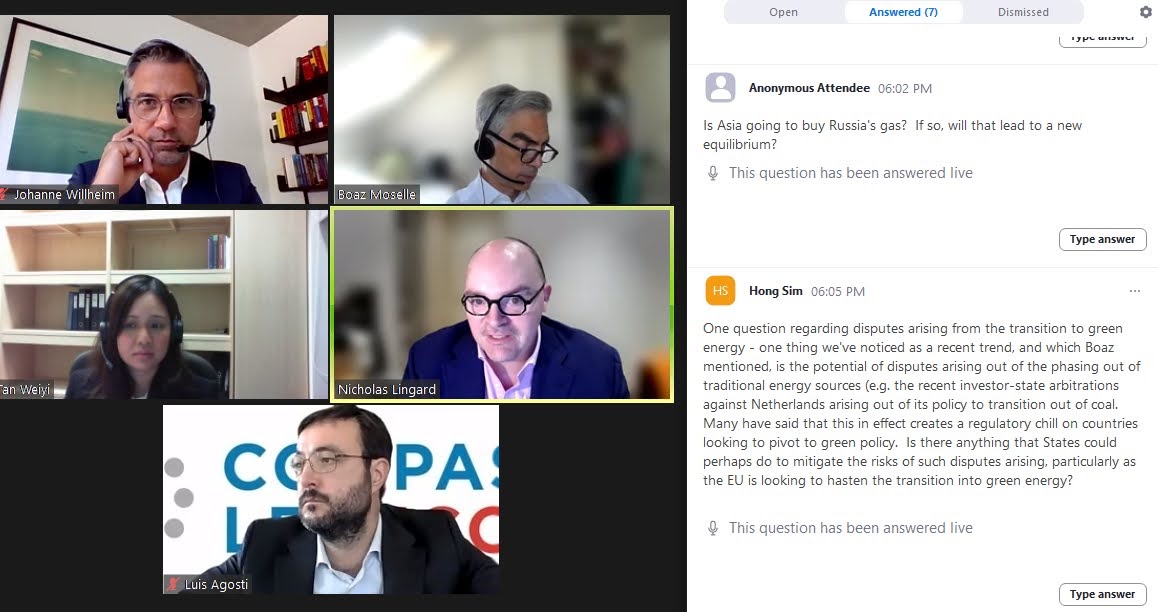 A major discussion point which arose was the need to be progressive in deriving and drafting dispute resolution mechanisms with a stronger push to mediation and to clearly identify core issues in dispute which then may need to be subject to resolution via arbitration, so as to save time and avoid costly, long drawn out proceedings.

All in all, it was a well-received event with a turnout of around 45 delegates.  It was followed by July’s webinar, forming the second part of this series, which focused on the Renewables Market.